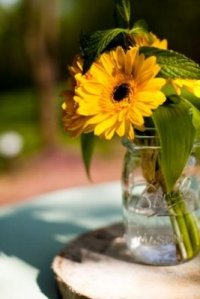 Just an ordinary day.  A lazy Sunday – Father’s Day, in fact.  It began like any other Father’s Day, with a breakfast of foods we shouldn’t eat and showering Nolan with silly cards and even sillier gifts.  It was a good day.  Hot, though.  Too hot to do anything other than hit the local water park for a little fun in the sun.  Swimsuits were donned, beach bag was packed and off we went.  Without a care in the world.  Just an ordinary day.

But it was no ordinary day.  It was a day that would change us forever.  From that day forward, our lives would be split into two distinct halves.  Before and after.  It all started with a phone call.

Isn’t that the way with bad news?  A simple ringing of the phone, an unsuspecting hand reaches out to answer.  The voice on the other end delivering a blow to the gut.

Your house is on fire.

Indeed it was.  Though I have to admit I never really thought it was going to end up being any big deal.  Perhaps a little damage, easily fixed.  But as we headed north the short distance from the park to our neighborhood, we realized that this was bad.  Very bad.  Thick, black smoke billowed up over the trees, filling the sky.  Panic set in then.  Smoke like that meant only one thing  – this was going to be a big deal. 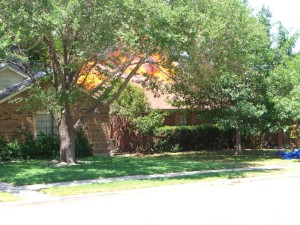 As we turned onto our street, we were met with a sight I will not soon forget.  Four engine trucks, one with its ladder extended, an ambulance and several police cars blocked the street. A sea of neighbors stood in their yards braving the 100 degree temperatures to bear witness to the destruction.  All we could do was stand there with them and watch as our house burned.

In the end, there was nothing anyone could do.  The firemen did their best but the house was a total loss.  Everything we owned and collected over the last twelve years was either ash or buried beneath feet of charred and sodden debris. 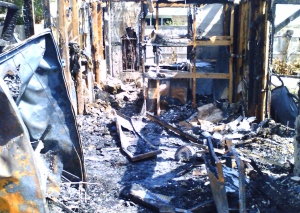 It is an eerie thing, to walk through your still smoldering home.  A home where just a couple of hours before you were laughing and giggling in your pjs debating what to do with the rest of the day.  Still in shock, I picked my way through what had been the foyer.  Now it was filled with the remains of wet ceiling, roofing and insulation – the tiled floor beneath invisible.  My feet sucked down into the muck, the acrid scent of smoke and charred material filled my nose and stung my eyes.  I couldn’t believe the utter and complete destruction.  It was overwhelming.  What were we going to do?

We would move forward, of course.  Later that night – after a visit from the American Red Cross (give and give often – they do good work) and the dearest, most unselfish friends anyone has the right to have; after calls to the insurance company were made and all of those gawkers who sat in lawn chairs to watch the excitement had gone home – I stood in line at Wal-Mart in donated pants two sizes too big, panty-less and laughed.  I laughed because I couldn’t cry anymore but also at the absurdity of my standing here buying underwear at midnight, and thinking how ironic it was that we just had the foundation fixed.

In the days and weeks that followed, I would come to accept that stuff is just stuff – a house is just a house.  It is all replaceable.  Homeowners insurance saw to that.  Sure it was a frustrating and even traumatizing ordeal, one I don’t wish to ever repeat but it made me appreciate the tangible things in my life – there is no one material object that I can’t live without (although underwear is nice to have).  Stuff doesn’t make you who you are, it doesn’t make your house your home – the people inside do (and cats).

Today marks the fifth anniversary of that ordinary day when our lives changed.  We will be celebrating with a bbq and a trip back to the water park that started it all.

Are we tempting fate?  Maybe.

This is me. Is that you? View all posts by Peggy Isaacs

4 thoughts on “No ordinary day.”

Leave me a comment. I'd love to hear what you think. Cancel reply

A collective of poems and photos.

A collective of poems and photos.